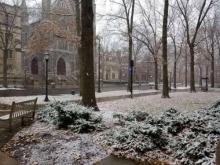 The Yale University Department of Linguistics hosted the annual Stony Brook–Yale–NYU–CUNY (SYNC) conference on Saturday, December 9. Graduate students from all four institutions came to Yale University’s main campus in New Haven, Connecticut, to present recent results as well as ongoing research in phonology, morphology, and syntax, as well as computational and experimental linguistics.

In the morning sessions, Yale’s Emanuel Quadros spoke about nasal dipthong reduction in Brazilian Portuguese. Then, Seoyoung Kim of Stony Brook University spoke about the phonology of compounds in Seoul dialect of Korean, while Naomi Lee of New York University gave an Optimality-Theoretic analysis of alliteration patterns found in Old English Poetry. Next, Hossep Dolatian of Stony Brook University talked about phonological constituents in Western and Eastern Armenian, and our very own Samuel Andersson proposed a functional explanation for syncretism in gender-marking paradigms that does not appeal to Universal Grammar.

After the lunch break, Professor Maria Piñango delivered the invited talk of the conference, presenting the Language & Brain Lab’s research on the neurolinguistic foundations of semantic composition.

This year’s conference was planned and organized by the SYNC 2017 Organizing Committee. The Committee, led by Luke Lindemann, consisted entirely of Yale graduate students, who were responsible for arranging the logistics of the conference, reviewing and accepting abstract submissions, and organizing presentation sessions and other events on the day of the conference itself. Funding for the conference was provided by the Department of Linguistics, the Office of the Dean of the Faculty of Arts and Sciences, and the Graduate and Professional Student Senate.

The program for SYNC 2017 is available on the conference website. Pictures from the morning sessions and afternoon sessions are available on our Facebook page. Next year’s SYNC will be held at Stony Brook University in Stony Brook, New York.