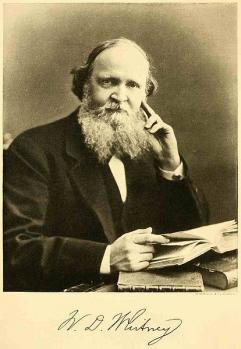 William Dwight Whitney was born in 1827 in Northampton, MA. He entered Williams College at the age of 15, graduated in 1845 as an 18 year old, and then attended the newly established Graduate School at Yale to study Sanskrit.

In 1850, Whitney went to Berlin to study Indo-European philology with Weber and Bopp; then to Tübingen to study under Roth. On returning to the United States, Whitney replaced Salisbury as professor of Sanskrit at Yale, where he also taught modern languages, and later became professor of Comparative Philology (1869). His students at Yale included Charles R. Lanman.

Whitney served as secretary to the American Oriental Society from 1857 and became president of the society in 1884. He assisted in the editing of the 1864 edition of Webster’s American Dictionary, and in 1869 helped found the American Philological Association, also serving as its first president.

Whitney’s many important publications include Language and the Study of Language (1867), A Sanskrit Grammar (1879), and The Roots, Verb-forms and Primary Derivatives of the Sanskrit Language (1885).