The Greek above the front door translates to ‘Friendship, the sweetest influence.’ It was a motto of the fraternity for which this building was built as their dormitory, as the initial Greek letter of each word spells out their name P(hi) G(amma) D(elta).

It seems Phi Gamma Delta originally had the Egyptian Revival building (the ‘Vernon Tomb’) built for them further down on Temple Street towards Trumbull in 1900 (according to a Yale Alumni Magazine ‘Throwback Thursday’ post from June 25, 2015). This was eventually torn down in 1927 and is the current site of Helen Hadley Hall (graduate housing). 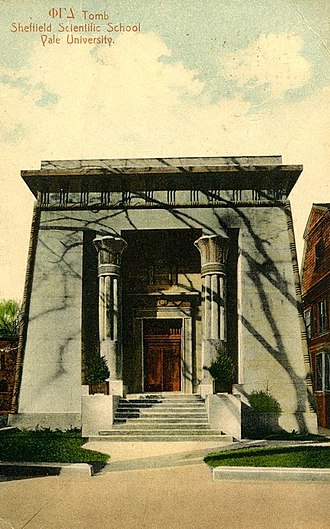 The Egyptian Revival building (‘Vernon Tomb’) which housed Phi Gamma Delta. It was demolished in 1927.

The current Dow Hall was in the process of being built in February 1914 for the Nu Deuteron chapter of PGD (they styled themselves as ‘Vernon Hall’), according to the Yale Sheffield Monthly newsletter (volume 20, page 225). Judging by the car in front of the building in the undated sepia photo, the building was finished by 1920. 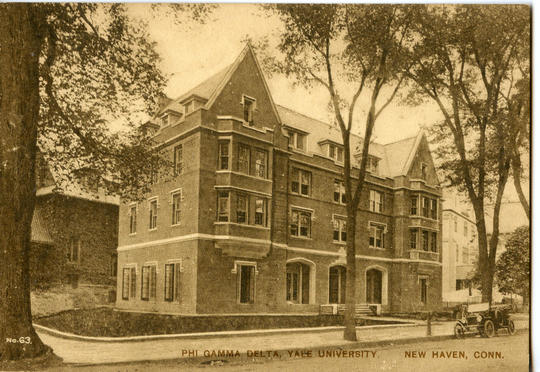 A sepia image of Dow Hall circa 1920 soon after it was constructed. At this time, Dow Hall housed ‘Vernon Hall’ (Phi Gamma Delta).

With the advent of the residential college system in 1933, Phi Gamma Delta sold the building to Yale in 1934, according to the Bulletin of Yale University 61:3 (page 59). It’s unclear, but it seems that the University used the building as graduate housing after that, which you can see with all its requisite ivy in the color photo from 1941 (photos from the Phi Gamma Delta website). The fraternity chapter itself disbanded in 1965, but was restarted in the 1990s as the senior secret society ‘The Order of Myth and Sword.’ 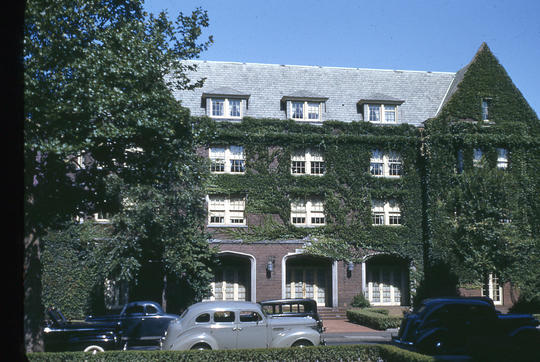 A colored image of Dow Hall in 1941. The brick walls are covered in ivy, and the building was used for graduate housing at this time.

The Linguistics Department moved from the third floor of HGS to Dow Hall in the Summer of 2002. Before it was renovated for the Center for Language Study and linguistics, the building was used for two things: the upper floors were used as annex housing for Timothy Dwight College, and the first floor and basement were the University Treasurer’s office. The renovation was delayed for several months by the fact that the Treasurer’s office contained a huge walk-in safe, which was the one place on campus where they kept real money. It was necessary to find somewhere to relocate that safe before they could begin the renovation (which involved almost totally gutting the building and putting in new floors, walls, staircases, etc. as well as the connector to 1 Hillhouse). 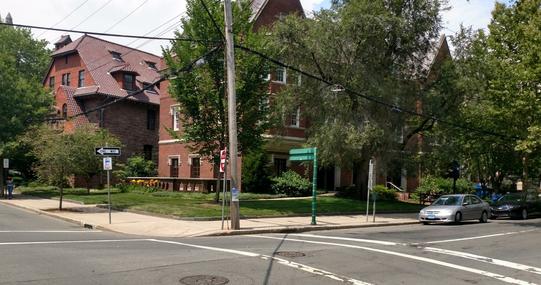 A recent photo of Dow Hall from across the street, on the corner where Timothy Dwight College stands.