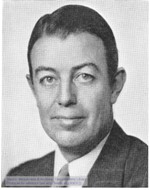 Benjamin Lee Whorf (April 24, 1897 in Winthrop, Massachusetts – July 26, 1941) was an American linguist. Whorf is widely known for his ideas about linguistic relativity, the hypothesis that language influences thought. An important theme in many of his publications, he has been credited as one of the fathers of this approach, often referred to as the “Sapir–Whorf hypothesis”, named after him and his mentor Edward Sapir. Originally educated as a chemical engineer, he took up an interest in linguistics late in his life, studying with Sapir at Yale University. In the last ten years of his life he dedicated his spare time to linguistic studies, doing field work on Native American languages in the United States and Mexico. He managed to become one of the most influential linguists of his time, even while still working as a fire inspector for the Hartford Fire Insurance Company. He published a grammar of the Hopi language, studies of Nahuatl dialects, Maya hieroglyphic writing, and the first attempt at a reconstruction of Uto-Aztecan. He also published many articles in the most prestigious linguistic journals, many of them dealing with the ways in which he saw that different linguistic systems affected the thought systems and habitual behaviour of language users.