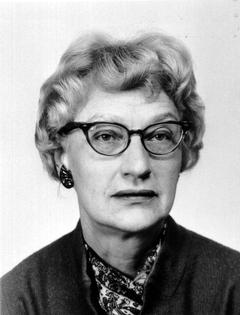 At the University of Chicago she undertook graduate work on comparative philology. It was at Chicago that Haas began to study under Edward Sapir, whom she would follow to Yale. She began a long career in linguistic fieldwork at that time, studying various languages during the summer months. The languages that she studied over the ten-year period from 1931 to 1941 included Nitinat, Tunica, Natchez, Creek, Koasati, Choctaw, Alabama, and Hichiti. Her first published paper, A Visit to the Other World, a Nitinat Text, a collaboration with Morris Swadesh (to whom she would later be married for a time), was published in 1933.

She went on to complete her Ph.D. in linguistics from Yale University in 1935 with a dissertation entitled A Grammar of the Tunica Language. (Tunica was a language once spoken in what is now Louisiana.) Haas worked with the last fluent speaker of Tunica, Sesostrie Youchigant, producing extensive texts and vocabularies. She received the Ph.D at the age of 25.

Shortly afterwards, she conducted fieldwork with the last two speakers of the Natchez language in Oklahoma, Watt Sam and Nancy Raven, resulting in extensive unpublished field notes that constitute the most reliable source of information on the language. Shortly after this, she conducted extensive fieldwork on the Creek language as well, and was the first modern linguist to collect extensive texts in the language. Most of her notes on Creek and Natchez remain unpublished, though they have begun to be used by contemporary linguists.