A busy summer for Yale linguists 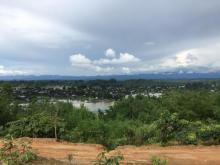 Members of our department have kept very busy this summer. Here are some of the activities they have been involved with.

This summer, the Institute on Collaborative Language Research (CoLang) was held at the University of Alaska Fairbanks. In June, rising senior Tom McCoy attended the two-week workshop component of the institute, which is co-sponsored by the Linguistic Society of America and provides an opportunity for community language activists and linguists to receive training in community-based language documentation and revitalization.

In July 2015, lecturer Hadas Kotek participated in the SIAS (Some Institutes for Advanced Study) Summer Institute held in Berlin. Convened by Angelika Kratzer (UMass Amherst) and Manfred Krifka (Humboldt University of Berlin), the institute’s title was “The Investigation of Linguistic Meaning: In the Armchair, in the Field, and in the Lab” and brought together doctoral candidates and recent PhDs from the US and Europe to work in groups to tackle a set of problems in semantics. This July, the group met again, this time for two weeks at the National Humanities Center in Chapel Hill, NC.

In August, professor Bob Frank and professor Raffaella Zanuttini were among a group of 15 Yale faculty members who traveled to Singapore to teach short courses at Yale-NUS, a liberal arts college founded in 2011 through a collaboration between Yale University and the National University of Singapore. Raffaella’s course was called “The Structure of Language,” and Bob’s was called “The Mathematics of Language.”

This summer PhD candidate Rikker Dockum continued his fieldwork documenting Khamti [kht], a Kra-Dai language spoken along the Chindwin River in northwestern Myanmar. He has been documenting this variety, which he calls Chindwin Khamti, since 2014. During this field trip, he elicited a few thousand lexical items, with a goal of both cognate identification and general compilation, and he recorded an audio corpus consisting of folk tales and conversations. In addition, he worked on transcribing much of that corpus, as well as audio from the sentence corpus elicited last year (~2,000 sentences and ~15,000 words from 37 speakers).

From July 5 to August 20, PhD students Luke Lindemann and Chris Geissler were in the Kathmandu Valley of Nepal for fieldwork. Chris interviewed 72 Tibetan [bod] speakers in order to study the emergence of a diaspora Tibetan variety. Luke interviewed speakers of Nepali [npi] and Newari [new] and completed a pilot survey on the pragmatics of subject marking in these languages.

For 7 weeks this summer, PhD student Josh Phillips lived in a tent in Ngukurr, a community on the banks of the Roper River in southeast Arnhem Land, a region within Australia’s Northern Territory. He was investigating Australian Kriol [rop], a creole language that emerged through the contact between Australian English and the traditional languages of the Roper region in the early twentieth century. Those indigenous languages are now all critically endangered or extinct, and Josh was working in collaboration with the Ngukurr Language Centre, which organizes documentation and revitalization efforts. Josh’s research examines the effect of language contact on the linguistic ecology of the area, as well as what the differences between Kriol and English reveal in terms of the ways that language changes and the ways that this change is constrained.

Assistant professor Ryan Bennett spent a month in Guatemala this summer documenting the prosody of Uspanteko [usp], a Mayan language with roughly 2,000 speakers. Uspanteko is unique among Guatemalan Mayan languages in having innovated contrastive lexical tone. Along with this research, Ryan and his collaborator Robert Henderson (University of Arizona) gave a three-day workshop on practical phonetics at the Universidad del Valle in Sololá, Guatemala. This work is supported by NSF grant BCS/DEL-1551043/1551666 to both researchers.

PhD student Martín Fuchs continued his research on how contextual information modulates language change, focusing on the progressive to imperfective shift in different varieties of Spanish (Iberian, Mexican, and Rioplatense). He traveled to Madrid and Buenos Aires to test more than 50 subjects in self-paced reading experiments.

PhD student Matt Tyler and PhD candidate Ryan Kasak traveled to other parts of the United States for fieldwork on Native American languages. Matt went to Mississippi for 7 weeks, where he conducted research on the syntax and morphology of Choctaw [cho], a Muskogean language with approximately 10,000 speakers. He also made recordings of example words and sentences for potential use in educational and documentation materials. Ryan spent 2 months living on the Fort Berthold Indian Reservation in New Town, North Dakota. There, he oversaw four interns who were working with The Language Conservancy to collect data for the creation of pedagogical materials for the three highly endangered languages spoken on the reservation: Mandan [mhq], Hidatsa [hid], and Arikara [ari]. He worked with elder speakers of Hidatsa and Mandan and edited textbooks for these languages. In order to develop an online dictionary for Hidatsa, Ryan collaborated with community members to collect recordings over for 8,000 lexical items. Finally, he served as an instructor for the 3rd Annual Mandan-Hidatsa-Arikara Summer Institute, teaching courses on Mandan phonology, inflectional morphology, and teaching methods over a two-week timespan.

At the 24th Manchester Phonology Meeting in May, postdoc Kevin Tang presented “Phonotactics with [awt] rules: the learnability of a simple, unnatural pattern in English,” a talk representing his joint work with John Harris (UCL) and Nick Neasom (UCL). They are still collecting data, so you can participate in their web experiment if you are interested. At the same conference, Kevin and assistant professor Ryan Bennett gave a talk titled “Modelling the production and perception of Kaqchikel Mayan with ‘small’ data.”
In June, professor Larry Horn traveled to Split, Croatia, to give a keynote talk for the 7th International Conference on Intercultural Pragmatics and Communication. His talk was titled “The Tangled Web: Lying and Misleading under a Neo-Gricean Lens.” A few weeks later, he and collaborator Elitzur Bar-Asher Siegal (The Hebrew University) delivered a plenary talk titled “Here’s Us a New Free Dative: Presentatives and Non-Subcategorized Datives in English, Hebrew, and Elsewhere” at a conference called Language Contact, Continuity and Change in the Emergence of Modern Hebrew, held in Jerusalem.

In June and July, the Yale Grammatical Diversity Project hosted Peter Staub, a visiting undergraduate researcher from Pomona College. He was supervised by postdoc Jason Zentz​ and the faculty leaders of the YGDP, and he spent his time investigating the fixin’ to/finna construction found in Southern and African American English; his work will appear on the YGDP site in the near future. Rising senior Aidan Kaplan also continued working on the project this summer, using geospatial mapping techniques to analyze YGDP survey data.