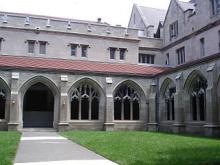 Matt Tyler’s talk compared two unrelated languages—Choctaw, a Native American language spoken across the Southern United States from Alabama and Mississippi to Oklahoma and California, and Basque, a language spoken in northern Spain and southern France—in their use of absolutive promotion (AP). AP is a phenomenon in which a noun that normally has absolutive Case has ergative Case instead. Both languages observe a prohibition, known as the Person–Case Constraint (PCC), against certain combinations of prefixes and suffixes that mark Case or agreement, and in both languages, AP is used to avoid violating the PCC. The two languages differ, however, in that AP applies to different kinds of words in Choctaw than in Basque. Matt’s talk examined the difference between Choctaw and Basque in the use of AP, and concluded that the difference comes from discrepancies in the way in which dative Case is assigned.

Australian Kriol is an English-based creole language spoken in Australia. Josh’s talk investigated the meaning of the Australian Kriol word bambai, whose etymological origin is the English phrase by and by. This word is said to have an apprehensional meaning: in certain contexts, it may convey that the speaker believes a certain event might happen, and that the speaker considers this event to be undesirable. Bambai also has a subsequential meaning, in which it indicates that some event occurred after another event. Observing that words with subsequential meanings often attain apprehensional ones over time, Josh’s talk developed a semantics for bambai that accounts for both kinds of meanings using a Kratzerian analysis of modal polysemy. This analysis constitutes the first semantic treatment of apprehensional words.

Finally, Jason presented a poster at the Workshop on Dynamic Modeling in Phonetics and Phonology. Jason’s poster introduced a methodology, developed with Shigeto Kawahara of Keio University, for representing the movement of the tongue during speech using a small number of numerical parameters. This is achieved using discrete cosine transformation (DCT), an algorithm that takes data points representing positions of sensors on the tongue over time and outputs a smooth curve that connects the data points. The curve is constructed by adding together cosine waves, each of which is described by a number called a coefficient. Jason and Shigeto found that the first four cosine waves suffice to produce an accurate representation of the tongue trajectory. The authors then argued on the basis of data represented using four DCT coefficients that certain syllables in Japanese lack a vowel even though they are traditionally thought to contain a /u/.

The titles of the three talks and poster were as follows.

CLS is an annual conference organized by graduate students at the University of Chicago. It was held this year in Chicago from May 25 to May 27. Matt Tyler presented at the Syntax Session on May 25, while Matt Barros, Hadas, and Josh presented at the General Sessions on May 27. The Workshop on Dynamic Modeling in Phonetics and Phonology, held on May 24, is a specialized workshop held in conjunction with this year’s main CLS conference. The abstracts and schedule for the main CLS conference are available on the conference website. The abstracts and schedule for the Workshop are available on the workshop website.