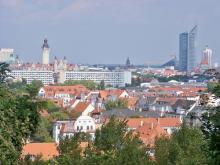 Professor Bob Frank visited the University of Leipzig in Leipzig, Germany, in the fall to attend the dissertation defense of a graduate student and present joint work with Lecturer Matt Barros.

Andrew Murphy received his PhD last semester from Leipzig’s Interaction of Grammatical Building Blocks Research Training Group (iGRA). His dissertation, supervised by Gereon Müller and Fabian Heck, was defended on October 12, with Bob in attendance as an outside committee member. Entitled Cumulativity in Syntactic Derivations, Andrew’s dissertation investigates a kind of linguistic phenomenon called gang effects. According to constraint-based theories of grammar, the grammar of a language is best described as a collection of criteria, known as constraints, that should be satisfied by words and sentences of the language. Constraint-based theories often assume that these constraints contradict one another, and may be violated to varying degrees. Each constraint is assigned a certain level of importance, so that a less important constraint may be violated in order to satisfy a more important constraint.

Gang effects occur when two constraints of lower importance “gang up” to override third constraint of higher importance. For example, consider the following sentences of Russian.

The next day, Bob gave a talk entitled Attention Hungry Subjects and Clause-Boundedness Effects. This talk, also presented with Matt at Yale’s Multiple questions about sluicing workshop last spring, discussed a type of sentence called sluicing. Sluicing is when a part of a sentence containing wh-words is omitted, but the wh-words are still pronounced. For example, in the following sentence, the word met may optionally be omitted.

Sluicing is not possible when there are two wh-words left behind, which refer to nouns found in different clauses. For example, the following sentence is not possible because which student refers to some student, which occurs in the main clause, while which professor refers to some professor, which appears in an embedded clause.

This restriction is called the clause-mate constraint (CMC).

Bob’s talk discussed some exceptions to the CMC. For example, if Sally is replaced by a pronoun referring to some student, then the sentence is possible.

Another exception occurs when the embedded clause contains a filler pronoun, known as an expletive pronoun. For example, the pronoun there in the following sentence does not refer to any particular place, but exists simply because the verb in the embedded clause requires a subject.

Bob was in Leipzig from October 12 to October 13. Information about Bob’s talk is available on the iGRA website.