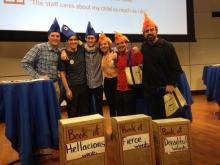 As previously reported, the Yale linguistics department sent two teams to the 5th Annual New Haven Reads Spelling Bee, held last night at the Yale School of Management. Over 350 people attended the bee to cheer on the 42 (costumed) teams of community members and to support the literacy activities of New Haven Reads. For more photos, check our our Facebook album!

Both of the linguistics team names are pronounced /fɪʃ/ (fish) but their spellings are inspired by a joke about English spelling often mistakenly attributed to George Bernard Shaw: Team Ghoti has the <gh> /f/ from laugh, the <o> /ɪ/ from women, and the <ti> /ʃ/ from nation; Team Phessi has the <ph> /f/ from physics, the <e> /ɪ/ from England, and the <ssi> /ʃ/ from mission. To go with the fish theme, Team Ghoti wore Nemo hats and Team Phessi wore Dory hats.

Team Ghoti, comprised of graduate students Chris Geissler and Sarah Babinski and postdoc Matt Barros, participated in “Swarm” (Round) 4, where they correctly spelled words such as debacle and cataclysm. They were eliminated along with most of their competitors after misspelling (just slightly!) the word braggadocio.

In Swarm 5, Team Phessi (graduate students Luke Lindemann and Dan Schwennicke and postdoc Jason Zentz​) successfully spelled words such as accoutrement​ and sycophant before drawing on Luke’s Indo-Aryan expertise to provide the correct spelling for bahuvrihi, a Sanskrit word for a type of exocentric compound. They were the only team to spell this word correctly, so they advanced to the final round.

Facing off against Team Phessi in the final round were 5 other teams:

Team Phessi made it through several words in the final round, including stentorian, simulacrum, consigliere, and aardwolf. By that point, the Librarians…from Hell! were the only other team remaining. Neither team knew the next word, a term of unknown origin for a violent gust of wind descending from the mountains to the sea. The linguists suggested willowaw and the librarians guessed williwaw, which turned out to be the correct spelling, making them the overall winners.

Congratulations to both Ghoti and Phessi for an excellent showing at the bee!