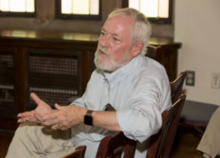 Language Science Press has published a second edition of Emeritus Professor Steve Anderson’s celebrated monograph Phonology in the Twentieth Century (U Chicago Press 1985) — an important history of the development of phonological thinking over the course of the last century which taxonomises and contextualises the contributions of important theorists and tensions between “representational” and “rule-based” approaches to the sound structures of human language.

This republication represents the fifth instalment of LSP’s History & Philosophy of the Language Sciences series. If the 1985 edition represented “more than a review of developments in phonology; com[ing] very close to being a history of the field at large”, the second edition incorporates the final, “turbulent” decade-and-a-half of the 20th C.

That is, the new edition greatly expands on its predecessor, reorganising elements of the original and incorporating developments in phonological theory from the late eighties and nineties. Accordingly, the new additions seek to “extend the picture presented [in the first edition] in a way that brings us more authentically to the turn of the century, while also fleshing out the references and noting relevant work that has appeared since.”

These extensions are made particularly clear in the book’s new coda ‘Toward a new millennium’ — here, Anderson provides significant new discussion of the interventions made by metrical and autosegmental theories, muses on the advent and motivations of both the optimality-theoretic and the ‘Laboratory Phonology’ research programs, and, critically, makes a number of incisive observations and generalisations about trends in the history, philosophy & sociology of the field.

An open access version of this text is available on the LSP website through the link below.