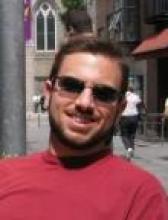 PhD candidate Sean Gleason successfully defended his dissertation on July 16. Appearing in the audience was his advisor, Professor Raffaella Zanuttini, along with members of his dissertation committee and other colleagues in the department.

There are two ways to create passive versions of AcI sentences. One way is to make you the subject of the sentence, as shown in Sentence 1 below. When taking this option, the pronoun you appears in the nominative form tu “you.” The other way is to change the verb into the passive form. This is shown in Sentence 2 below. The verb dicitur “it is said” appears in the passive form, while the pronoun te “you” remains in the accusative form.

Sean’s dissertation investigates what the difference is between these two kinds of passives, and why one of them requires a nominative subject while the other requires an accusative subject. While Sentence 1 and Sentence 2 are both grammatically valid ways of forming the passive version of an AcI sentence, they differ slightly in meaning. When the subject of the embedded clause appears in nominative form, as in Sentence 1, the sentence is typically construed to place emphasis, or focus, on the nominative subject, making it a new topic of conversation. For example, a speaker might say Tu venisse diceris ‘You are said to have come’ in order to change the topic of conversation to the listener. On the other hand, there is no special nuance in meaning associated with an accusative subject as in Sentence 2. By combining theories on how languages determine which noun forms to use with theories on the structure of sentences that place focus on particular nouns, Sean is able to construct an elegant account for why these two kinds of passives exist and why they differ in terms of requirements on noun forms.

The dissertation defense is one of the last steps in the Linguistics PhD Program. After presenting their work to the department, defending students make final revisions to their dissertations based on feedback from their advisors and committee members. When the dissertation is complete, the student files the dissertation and graduates at the Yale Commencement ceremony.

Congratulations Sean, and good luck in your career!