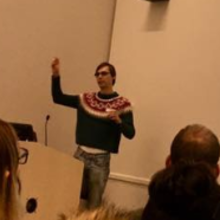 Samuel Andersson has published a paper on Abkhaz in the Journal of the International Phonetic Association. The paper is a phonetic description in the Illustrations of the IPA series, and discusses the Cwyzhy dialect of Abkhaz spoken in Turkey. Samuel’s paper is co-authored with Bert Vaux, as well as Zihni Pysipa (Şener), who was one of the last speakers of this dialect. One of the novel contributions of the paper is the documentation of allophony between plain and velarized laterals, a feature of Abkhaz which has not previously been described.