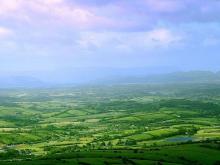 Congratulations to Assistant Professor Ryan Bennett, who has been awarded a grant by the National Science Foundation. The grant, titled “An Ultrasound Investigation of Irish Palatalization,” is part of a collaborative NSF grant with linguists at UC Santa Cruz.

Ryan, in collaboration with Jaye Padgett and Grant McGuire of UCSC, will work with Máire Ní Chiosáin of University College Dublin to study Irish Gaelic, the Celtic language once spoken throughout Ireland, but which is now endangered. Speaker estimates range between 70,000-140,000 people, or no more than 3% of Ireland’s population.

The project will continue the first ultrasound study of Irish, focusing on palatalization, a contrastive feature of Irish consonants that is in danger of disappearance due to the heavy influence of English. The team will gather data from Irish’s three major dialect regions. Ultrasound imaging will allow the researchers to see in new detail the shape and movement of the tongue as Irish is spoken. In conjunction with audio recording of speech and video recording of lip movement, these new data will be crucial for a better understanding of palatalization in Irish, and of the language overall.

The study results will be of benefit in a number of ways. For one, the results will help with the development of teaching materials for second language Irish learners, as the palatalization contrast presents one of the greatest obstacles for students of the language. Secondly, graduate and undergraduate students involved in the project will gain important training in all phases of the research process. Additionally, as the use of ultrasound for linguistic research is still new, the methods and results of the project will be of benefit to linguists around the world interested in employing similar techniques with languages they study.