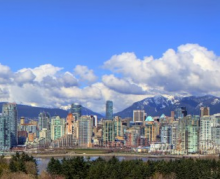 Assistant Professor Ryan Bennett was an invited plenary speaker at the 2015 Annual Meeting on Phonology (AMP 2015), held October 9-11 in Vancouver, British Columbia. Also presenting from our department was lecturer Claire Moore-Cantwell. The event was jointly hosted by the linguistics departments of University of British Columbia and Simon Fraser University.

It is well known that dependent morphemes (affixes, clitics) may idiosyncratically select for prosodic properties of their hosts (Inkelas 1990, Zec 2005, etc.). For example, the English comparative suffix -er does not attach to stems of greater than two syllables in size (sunni-er vs. *insightful-er). Prosodic subcategorization is typically understood to be lateral and local: dependent morphemes may select for prosodic properties of an immediately preceding or immediately following element.
Less attention has been paid to the vertical dimension of prosodic subcategorization—the prosodic constituent produced by the attachment of a dependent morpheme to its host. We argue that vertical subcategorization is responsible for the variable prosody of certain functional items in Macedonian (Slavic) and Kaqchikel (Mayan), two genetically and geographically distinct languages. In short, the vertical subcategorization requirements of an outer morpheme can alter the prosodic parsing of an inner morpheme in the same complex. This gives rise to prosodic alternations like [A [B]] ~ [X A B], in which the prosodic boundary between A and B is sensitive to the presence or absence of outer morpheme X. We refer to this phenomenon as prosodic smothering.
In Macedonian, preverbal object clitics are typically unstressable (<go VIde> ‘(s)he saw him’, *<GO vide>). But in the presence of wh-words or sentential negation such clitics are parsed into the same prosodic word as the verb, and may then bear stress (<koj GO vide> ‘Who saw him?’). This rather puzzling pattern can be analyzed as a case of prosodic smothering: the prosodic subcategorization requirements of sentential negation and wh-words force a deviation from the default prosodic parse that would otherwise be observed for the clitics.
In Kaqchikel, a variety of diagnostics indicate that absolutive agreement markers show a different prosodic parse depending on the presence or absence of outer aspect marking, e.g. [x-in-b’e] ‘I went’ vs. [in=jwi’] ‘I am intelligent’. Exactly as in Macedonian, this prosodic variation owes to the vertical subcategorization requirements of an outer morpheme, in this case the outer aspect marker. There is thus strong evidence that vertical subcategorization can induce prosodic restructuring of lower elements. We conclude with a discussion of the theoretical and methodological implications of our proposal.