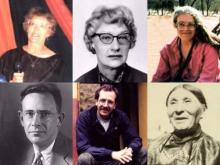 Within the Yale linguistics department, we have been engaged in a number of efforts to encourage and support the involvement of people of diverse backgrounds in the life of our community. As part of these efforts, we have begun to reflect on the iconography in our physical spaces, where for the last several years, we have showcased pictures of philologists and linguists who spent time at Yale in the 19th and early 20th centuries. While these scholars made outstanding contributions to our understanding of language, we have increasingly felt that they do not represent the ethnic and gender diversity of our current department. Moreover, linguists in our department today carry out research using a variety of approaches and perspectives that did not exist at the time these scholars (primarily philologists, historical linguists, and structural linguists) conducted their work.

This topic arose during departmental climate conversations held in the fall of 2014 as part of a larger Graduate School initiative. In 2015-2016, we specifically began to discuss the ways in which we could update the existing iconography to remedy the mismatch in gender, ethnicity, and approach to the study of language, and in so doing, to create an environment that would better characterize our current department and foster an atmosphere of inclusiveness. In the spring of 2016, in part spurred on by broader campus conversations about the decision to retain the name of Calhoun College, a few members of the department posted a list of named rooms, which garnered significant attention through social media.

This gave us the opportunity to discuss these issues at the departmental level, where it was decided that we would revise the list of honorees to accommodate input from all members of the department. We formed a committee that managed this revision process and had placards made and installed on six common rooms in our department.

We are pleased to announce that these rooms are now named for Catherine Browman, Fidelia Fielding, Mary Haas (PhD ’35), Osvaldo Jaeggli (BA ’76), Edward Sapir, and Kay Williamson (PhD ’64). Our page about this naming initiative includes photos and short biographies about each one, as well as a fuller description of our selection process.