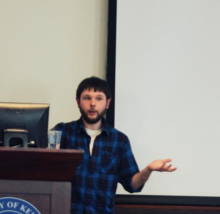 Parker Brody has published an article in the most recent issue of Journal of Historical Linguistics.  “Morphological exceptionality and pathways of change” explores the notion of analyzing cross-linguistically uncommon morphosyntactic structures in terms of their historical development. What may seem extraordinary in the synchronic snapshot of a language can often be clearly accounted for through diachronic considerations. This is illustrated via a study of the typologically uncommon phenomenon of multiple exponence, the realization of the same grammatical information in multiple places within an inflected word, in the Kiranti (Tibeto-Burman) languages. Typologically speaking, we do see a strong tendency cross-linguistically towards encoding grammatical information once within an inflected word, and against multiple exponence. Yet the phenomenon of multiple exponence is attested in a number of languages. The paper presents comparative evidence from the Kiranti languages that supports the claim that multiple exponence in synthetic verbs in the modern Kiranti languages comes as a result of the interaction between language (family)-specific typology (multiple agreement in periphrastic verbs) and an uncontroversial language change process (coalescence of periphrastic forms into synthetic forms).