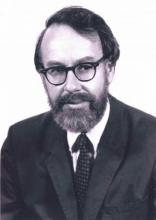 The Linguistic Society of America has established a student bursary fund in memory of Warren Cowgill, a former member of our department. From the LSA’s statement:

The LSA is delighted to announce that the family of deceased (1985) LSA member Warren Cowgill (Yale University) has established a new endowment to support a student fellowship serving historically under-represented scholars wishing to attend the LSA’s Linguistic Institute. The earnings from the new endowment, funded with a $50,000 donation, will enable students to participate in future Institutes tuition-free. The first award will be made at the 2021 Institute, to be held at UMass, Amherst. The Warren Cowgill Fellowship will be awarded to a student from a racial or ethnic background that has traditionally been under-represented in the field of linguistics, including African-Americans, Latinx/Hispanic, Native American, Pacific Islanders, and those of mixed heritage.

Warren Cowgill was an eminent linguist who served as the Hermann and Klara H. Collitz Professor at the 1972 LSA Linguistic Institute, held at the University of North Carolina-Chapel Hill. He was an authority on Indo-European linguistics, especially Celtic, Germanic, and Greek, and served as the consultant on Indo-European to the Encyclopædia Britannica. He was a proponent, unusually among Indo-European linguists of his time, of the hypothesis that Indo-European should be classified as a branch of Indo-Hittite, with Hittite as a sister language of the Indo-European languages, rather than a daughter language. He graduated from Stanford University in 1952 and received a Ph.D. from Yale in 1957.

For more information about Cowgill’s stature and place within Indo-European Studies generally, please see these excerpts from the Introduction to The Collected Writings of Warren Cowgill.