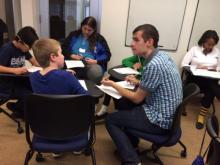 Tomorrow, January 26, fifty-one students from local middle schools and high schools will arrive at Yale to compete in the Open Round of the 2017 North American Computational Linguistics Open competition (NACLO). Each student will take a 3-hour written test consisting of linguistics puzzles. Some of these problems might look familiar from introductory linguistics assignments, while others involve developing a computational procedure to solve a linguistic task, and still others require students to decipher writing, numeral, calendar, or kinship systems. The top achievers across North America will then advance to NACLO’s Invitational Round; the finalists there form teams that compete in the International Linguistics Olympiad.

This is the fourth year that the Yale linguistics department has hosted the competition, organized by professor Raffaella Zanuttini​ and a team of undergraduates including seniors Aidan Kaplan ​and Tom McCoy, junior Kate Rosenberg, sophomore Jay Pittman, and freshman James Wedgwood. Aidan, Tom, and James all participated in NACLO in high school and advanced to represent North America at the International Linguistics Open competition.

The students registered to compete tomorrow come from schools all over Connecticut, including several from New Haven Public Schools and some who are homeschooled. Many of them have participated in at least one of the five practice sessions we have held in our department over the past several months, led by our amazing undergraduates, who have shown the younger students all kinds of tips and tricks, and taught them a lot of linguistics along the way!