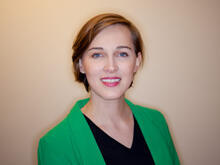 Milena Šereikaitė received the prestigious “Best paper in Language Award”, together with her co-authors Julie Anne Legate, Faruk Akkuş and Donald Ringe. Their article “On passives of passives” (Language 96:4, December 2020) furthers our understanding of the notion of voice and provides an account of the well-known but mysterious observation that verbs cannot be passivized twice. From the LSA website: “Voice phenomena are core to the expression of verbal arguments in many languages, and the study of passive voice has had an especially long and rich history. A core intuition about passive voice verbs is they cannot themselves be passivized, something first given explicit treatment by Perlmutter and Postal (1977). However, a deeper explanation of this fact has proved elusive, and subsequent work has identified three apparent counterexamples, found in Turkish, Lithuanian, and Sanskrit. In their 2020 Language paper Julie Anne Legate, Faruk Akkuş, Melena Šereikaitė, and Don Ringe reexamine these three cases studies, and through careful, detailed empirical argumentation demonstrate that in each case the construction represents something other than a passive of a passive. Building on recent traditions that decompose verbal argument structure in the syntax, Legate et al. show that an analysis of the passive as a separate Voice head that only derives a passive function when used in exactly one context — in lieu of an active Voice head — naturally explains why verbs cannot be passivized twice. This study thus shores up a decades-old generalization about passive voice, while also offering a new understanding of what the central ingredients of voice are.”