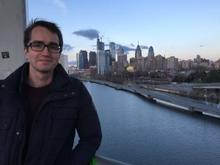 The most recent issue of Natural Language & Linguistic Theory includes an in-depth article on Choctaw by PhD candidate Matthew Tyler. The paper is entitled “Absolutive Promotion and the Condition on Clitic Hosts in Choctaw.” This paper originated as his second Qualifying Paper, and has been extensively developed and revised since then, in part in connection with his dissertation work,  which draws on original fieldwork he has been conducting in Mississippi on Choctaw. He shows a few ways in which Choctaw patterns like an unrelated language, Basque. Both languages have a (somewhat rare) phenomenon known as “Absolutive Promotion,” and both languages have structural limits in the expression of verbal agreement markers known as “clitics.” However, Absolutive Promotion applies to a different set of structures in Choctaw, and clitic restrictions stem from the same structural constraint applied to a different set of syntactic heads. At a broad level, this paper shows how the same abstract processes and constraints on language structure can yield distinct surface patterns across languages.