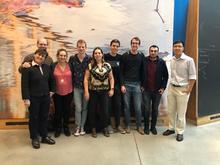 At the 50th meeting of the North East Linguistic Society at MIT, PhD candidate Josh Phillips presented some of his work on privatives in Australian languages. Josh’s poster, entitled ““Privative case” : displacement & renewal in the negative domain”, discusses forms with a meaning like ‘without’ or ‘-less’ in several Australian languages. He argues that these are undergoing a change so that they can attach to verbs as well as nouns, and provides a semantic description of the forms which is consistent with this changing usage. A consequence of this is that the negative existential cycle (described elsewhere in the literature on grammaticalization and language change) is analyzed as an expansion in the quantification domain of a negative operator.