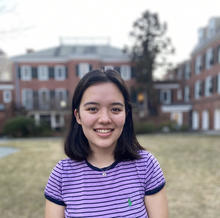 Linguistics major Josephine Holubkov ‘24 has won Babel magazine’s Young Writers’ Competition. Josephine is a member of the Yale Grammatical Diversity Project and has served as NACLO chair of the Yale Undergraduate Linguistics Society. As described on its website, “Babel is the quarterly language magazine that brings you cutting-edge linguistic research in an accessible and colourful format”. For seven years now, the good folks at Babel have been running an annual competition in which students can submit broadly accessible pieces that they have written on language and linguistics. This year, Josephine won the college-level competition with her excellent article “Bilingualism and Cognition”, originally submitted as a final project for LING 116 Cognitive Science of Language. The existence of the final project was a result of the move to on-line instruction in the wake of COVID, so this happy recognition of Josephine’s superb work is a silver lining of this difficult time.

*Josephine’s article is behind a paywall, but she has given Prof. Bob Frank a pdf of it that we can post. Please contact Bob (robert.frank@yale.edu) if you’re interested!