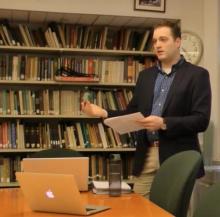 Congratulations to Jason Zentz, who successfully defended his dissertation on February 15, 2016! His dissertation, Forming wh-questions in Shona: A comparative Bantu perspective, examines the derivational relationships among the several types of wh-questions in Shona. Jason’s research was based to a large degree on extensive elicitation sessions with Yale alumna and native Shona speaker Thabani Dhlakama YC ‘13. A full video of the defense is available here, and handout at this link, and an abstract appears below.

Bantu languages, which are spoken throughout most of sub-Saharan Africa, permit wh-questions to be constructed in multiple ways, including wh-in-situ, full wh-movement, and partial wh-movement. Shona, a Bantu language spoken by about 14 million people in Zimbabwe and Mozambique, allows all three of these types. In this dissertation, I conduct the first in-depth examination of Shona wh-questions, exploring the derivational relationships among these strategies.
Wh-in-situ questions have received a wide variety of treatments in the syntactic literature, ranging from covert or disguised movement to postsyntactic binding of the wh-phrase by a silent question operator. In Bantu languages, wh-in-situ questions are often taken to be derived via a non-movement relation (e.g., Carstens 2005 for Kilega, Diercks 2010 for Lubukusu, Muriungi 2003 for Kîîtharaka, Sabel 2000 for Kikuyu and Duala, Sabel & Zeller 2006 for Zulu, Schneider-Zioga 2007 for Kinande), but alternatives have rarely been considered. I demonstrate how movement-based analyses that have been proposed for wh-in-situ in non-Bantu languages make the wrong predictions for Shona wh-in-situ, which lacks word order permutation, extraction marking, island effects, and intervention effects. These properties provide support for the traditional Bantuist view that the relation between the pronunciation site of an in-situ wh-phrase and its scopal position in the left periphery is not movement; I claim that in Shona it is unselective binding.
Full wh-movement in Shona gives rise to questions that bear a certain similarity to English wh-questions. However, using a range of diagnostics including extraction marking, island effects, reconstruction effects, and the distribution of temporal modifiers, I argue that what appears to be full wh-movement in Shona actually has a cleft structure: the wh-phrase moves to become the head of a relative clause, which is selected by a copula in the matrix clause. Just as in wh-in-situ, an ex-situ wh-phrase is pronounced lower than its scopal position, and the relation between these two positions is established via unselective binding. Additional evidence for this proposal comes from the sensitivity of partial wh-movement to island boundaries below but not above the pronunciation site of the wh-phrase, a pattern that has been predicted by previous analyses (e.g., Abels 2012, Sabel 2000, Sabel & Zeller 2006) but for which empirical support has been lacking until now. I therefore unify full and partial wh-movement under a single analysis for cleft-based wh-ex-situ that involves a step of relativization (independently needed for relative clauses) and a step of unselective binding (independently needed for wh-in-situ).