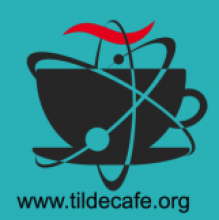 Professor Claire Bowern spoke to science enthusiasts at the Tilde Cafe about the historical study of language and its role in helping us understand our heritage as human beings. Her presentation introduced the various ways in which languages change over time, including changes introduced by speakers from newer generations in a language community as well as changes induced by contact resulting from migration, colonization, and globalization. Claire also highlighted the importance of preserving the thousands of languages that are quickly becoming extinct—since researchers often rely on the study of currently existing languages to uncover insights about the culture and geographic distribution of our ancestors, loss of linguistic diversity would result in the loss of a vital link between the present and the past.

The Tilde Cafe is a series of talks in which scientists, academics, and professionals introduce issues in their respective fields to the general public. Talks are delivered at the James Blackstone Memorial Library in Branford, Connecticut, and cover topics in chemistry, computer science, ecology, environmental studies, engineering, medicine, biology, mathematics, physics, and social sciences. A video recording of Claire’s presentation is available at the Tilde Cafe’s YouTube channel.