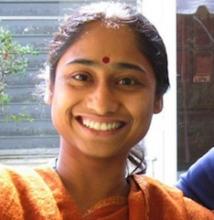 Ashwini Deo, Assistant Professor of Linguistics, is the recipient of the National Science Foundation’s CAREER grant, the Foundation’s most prestigious award for junior faculty. The grant will support Professor Deo’s ongoing work on historical Indo-Aryan and synchronic Bhili languages and enable investigation into the nature of the linguistic transition from the Late Middle Indo-Aryan period to the New Indo-Aryan period. The focus of this research is on the evolution of the semantic systems of tense, aspect, and modality. Undergraduate and graduate students at Yale, as well as research participants from the tribal linguistic communities in India, will play a significant role in carrying out her research.

With this project, Professor Deo anticipates expanding empirical knowledge about some of the more under-studied periods and languages of Indo-Aryan. The project has two facets: the first  will involve textual research into the literature composed between 500 CE and 1500 CE and the second will involve description of the grammatical variation among contemporary standard and non-standard Central Indo-Aryan languages. The expectation is that these projects taken up in concert will yield a picture of Middle and New Indo-Aryan that is far more detailed than either one taken in isolation. The resulting data will be employed to answer theoretical questions about the nature of grammaticalization paths and the evolution of tense/aspect marking from the formal semantic perspective. Importantly, these investigations will help facilitate the entry of diachronic Indo-Aryan material into linguistic theorizing.

Through Professor Deo’s project, Yale students will gain hands-on data collection and analysis experience, and relevant training through courses designed around the goals of the research project. This project also involves close collaboration with native speaker research participants from the Central Indian Bhili and Khandeshi regions.

A sizeable corpus of electronic texts and the results of documentation of the Bhili and Khandeshi languages developed as part of the resource-building activities of this project will be made accessible to the broader research community.