Home » Events » On the synchrony and diachrony of the Spanish Imperfective domain: contextual modulation and semantic change

On the synchrony and diachrony of the Spanish Imperfective domain: contextual modulation and semantic change 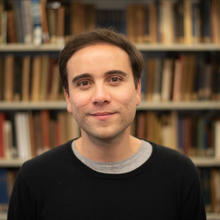 Event time:
Friday, December 6, 2019 - 5:00pm
Location:
Dow Hall 201 See map
370 Temple Street
New Haven, CT 06511
Event description:
The links between some linguistic meanings and their corresponding functional markers changes systematically and cyclically in what are known as unidirectional grammaticalization paths. One such change is the Progressive-to-Imperfective shift, in which languages go from having only one marker to convey event-in-progress and habitual readings to recruiting a new marker for optionally expressing the event-in-progress reading. Over time, the two markers get categorical domains of use: while the new marker becomes conventionalized for the event-in-progress reading, the old marker gets restricted to the expression of the habitual. Finally, the new marker generalizes to the expression of both readings, further restricting the domain of the old marker, until the cycle starts again. Although this path has been vastly documented crosslinguistically, the representations and processes that support its advancement through stages are still not well understood.

I argue that the availability of each marker to convey each of these readings at different points in time ultimately responds to the structure of the meanings that participate in the change, and to communicative and cognitive pressures that are reflected in features of the contexts in which these markers are interpreted. To address the nature of these representations and processes, I present evidence from Spanish, a language with two markers –the (old) Simple Present and the (newer) Present Progressive– that alternatively convey the event-in-progress and the habitual reading in a many-to-many mapping. This distributional pattern points to a more complex stage in the grammaticalization path in which a full categoricalization of the system has not been yet achieved, but where the generalization of the newer marker seems to be already underway. Through a corpus study across different time periods, and with data from experimental tasks in different dialectal varieties, I show how specific communicative and cognitive constraints have triggered the recruitment of the progressive marker, its categoricalization for the event-in-progress reading, and its incipient generalization into the more general Imperfective domain. Altogether, the patterns observed across times and dialects are consistent with a model of semantic variation and change embedded in a communicative system, subject to isolable contextual factors, and observable through experimental methodologies and careful examination of textual records.