Home » Events » Exploring SELF: A Copula in American Sign Language 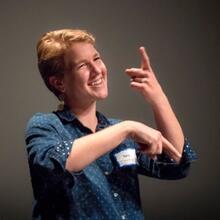 I challenge the commonly accepted assumption that American Sign Language has no overt copula and the myth that the syntactic expressions of various semantic concepts in ASL are generally flexible. First, I present evidence that a sign, termed SELF appears to function as a copula in present-day ASL. This sign evolved into its current function by way of a grammaticalization process called the copula cycle (Katz 1996), which consists of a deictic item transforming into a demonstrative, a pronoun, then into a copula by means of a series of syntactic reanalyses (Li & Thompson 1977). I present corpus evidence from Old French Sign Language (LSF) in the 1850’s, Old ASL in the 1910’s, and present-day ASL dating to the early 21st century. Then, I confirm with experimental evidence that SELF, and not other probable copulas in ASL, is preferred by ASL signers to pair with individual-level predicates, and not stage-level predicates (Carlsson 1977, Kratzer 1995). This suggests that there is a general preference in ASL for specific syntactic expressions (i.e., using SELF) to convey concepts with differing predicate types.