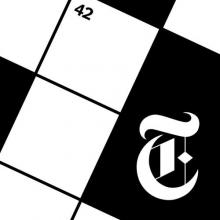 The crossword puzzle that appears in today’s New York Times is the creation of senior linguistics major Tom McCoy, a member of the Yale Grammatical Diversity Project. Journalist and linguist Ben Zimmer (Yale BA ’92) writes about today’s puzzle on the popular linguistics blog Language Log, saying: “I wouldn’t’ve thought it possible, but he’s managed to make a coherent theme out of a nonstandard grammatical variant in American English. I won’t spoil it for people who want to solve it — subscribers to the Times crossword can download it in Across Lite format or as a PDF. But if you don’t mind the spoilers, you can read the constructor’s notes on the Times’s Wordplay blog (Tom gives a nice plug for the YGDP there). And you can see the clues and completed grid on XWord Info.”

Tom has been constructing crosswords for the New York Times since his freshman year at Yale—you can see all 25 of them at his XWord Info author profile. His constructor’s notes for today’s puzzle include the following (spoilers removed):

For the past few years, I’ve been a member of the Yale Grammatical Diversity Project, which studies how grammar varies across dialects. The idea for this puzzle came when I was researching [a phenomenon described on the YGDP website].

When people think about dialectal variation, they usually think in terms of which words are available (e.g., whether you say soda or pop) and in terms of pronunciation (e.g. whether you pronounce caught and cot the same or differently). The project studies a third type of dialectal variation, namely grammatical variation. An example of this is with the word anymore: In most dialects, anymore typically has to follow a negative word such as not (“Gas is not expensive anymore”), but in some dialects it can occur without a negative word (“Gas is really expensive anymore”). This usage is called positive anymore, and it’s pretty common where I’m from (the Pittsburgh area).

This puzzle touches on one of the core beliefs of most linguists — namely, that nonstandard linguistic features […] should be embraced rather than disparaged. Language naturally varies across speakers and across time, and if you ignore its fluidity you miss much of its beauty. For a better explanation of this viewpoint, check out the op-ed “Our Language Prejudices Don’t Make No Sense” by [Professor] Raffaella Zanuttini.

A sincere thank-you to all the members of the Yale Grammatical Diversity Project, both for inspiring this puzzle and for being such a big part of my undergraduate career!