Yale linguists to present at SYNC 2015 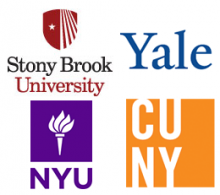 Three Yale linguistics graduate students will present their research at SYNC 2015, an annual mini-conference among the linguistics departments at SUNY-Stony Brook, Yale, NYU, and the CUNY Graduate Center. This year’s conference will take place at NYU on Saturday, December 5, 2015, and feature talks by Manu Quadros, Faruk Akkuʂ, and Rose Berger.

Manu’s presentation, “Islands of reliability in Portuguese nominalization,” examines the competition between two deverbal nominalization morphemes in Portuguese. Despite an increasing use of one morpheme over the past several hundred years, the other morpheme has remained productive. The project makes use of the Minimal Generalization Learner (MGL) of Adam Albright and Bruce Hayes (2003) to test the hypothesis that the reliable use of the less-common morpheme in a particular subset of the lexicon has contributed to the preservation of its productivity.

Faruk’s contribution, “What can vocatives tell us about the speech act layer?” contributes to the proposal of an additional layer of structure at the left periphery dedicated to conveying speech act information, an interface between the utterance and the discourse. This view is supported through a syntactic analysis of three vocative types in Turkish, and draws on syntactic and prosodic findings on Italian vocatives as well.

Rose examines the Anglo-Saxon texts of the Nowell Codex in “Using Dialectal Evidence to Determine Date and Provenance of Literary Compositions: A Case Study of Beowulf.” She analyzes the distribution of eo​ and io​ diphthongs in the two portions of Beowulf and the other documents in the Nowell Codex in relation to the vowel mergers in different dialects of Anglo-Saxon. Depending on the date of recording, this perspective casts light on the regional origin of the texts.