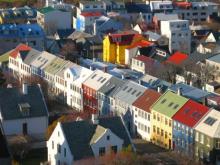 Matt Tyler spoke about the syntax–prosody interface: the relationship between the structure of a sentence and its pronunciation. When a person utters a sentence, the pronunciation of that sentence includes cues that indicate the structure of that sentence. For example, a parenthetical phrase might be surrounded by brief pauses, indicating that the words of that phrase should be grouped together. Other kinds of phrases might be characterized by patterns in their pitch contours. Prosodic cues such as intonation, timing, or stress group sentences into subdivisions. These subdivisions resemble, but are not identical to, the syntactic phrase structures of sentences. One discrepancy between prosodic and syntactic structure exists between words and prosodic words. While nouns and verbs are typically grouped as individual words by prosodic cues, functional words such as articles or prepositions are grouped as if they were part of other words. According to Match Theory, it has traditionally been thought that this occurs because the rules responsible for determining prosodic structure ignore functional words, so that they end up sounding like parts of other words. However, Matt’s talk argued that prosodic rules do not ignore functional words by default, and that we should instead consider functional words to come with lexical information explicitly specifying that they should not be considered prosodic words. This proposal is used to explain certain interactions previously unaccounted for.

Jim and Matt Barros gave a talk called Case (mis)matching in fragment answers. Their talk dealt with a type of sentence called fragment answers. Fragment answers occur when a question is answered with a declarative sentence that resembles the question, except with material omitted. For example, consider the following dialogue.

According to current linguistic theory, the answer Olafur is really an abridged version of the longer answer They helped Olafur first. This longer answer mirrors the question in terms of structure, and the fragment answer is derived by omitting They helped and first. A major question regarding fragment answers is what exactly it means for the answer to “resemble” the question. Some believe that the question and answer must have a similar structure; others believe they must have a similar meaning. To investigate this question, Jim and Matt examined fragment answers in Icelandic. In this language, verbs may require subjects and objects to bear certain cases. Sometimes, but not always, the meaning of the verb changes depending on which case is assigned to subjects and objects. With fragment answers in Icelandic, if case assignment changes the meaning of the verb, then the wh-word must have the same case as the corresponding subject or object in the fragment answer. If not, then the wh-word and the answer may have different cases, as long as they are both compatible with the verb. Based on these observations, Jim and Matt developed an analysis for fragment analysis in the Minimalist theoretical framework that enforces structural similarity between the question and the answer.

Finally, Jim presented a poster on the structure of Icelandic verbal phrases. According to modern linguistic theory, words and phrases may “move” from one part of a sentence to another. For example, sentence 2 below can be formed from sentence 1 by moving the phrase taken them from me to the beginning of the sentence.

In addition to the three Yale presentations, undergraduate alum Nick Huang gave a presentation entitled The bound possessor effect: a new argument for the phasehood of definite DPs. Nick recently graduated from Yale College, where he worked on the Yale Grammatical Diversity Project with Professor Raffaella Zanuttini. Nick is now a graduate student at the University of Maryland.

NELS was held from October 27 to October 29 in Reykjavik, Iceland. The program and abstracts are available on the conference website.