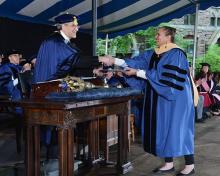 Two linguists were honored at this year’s Yale University Commencement.

Jessie Little Doe Baird of Mashpee, Massachusetts, is known for her efforts to revitalize the Wampanoag language. This language was originally spoken in southeastern New England, but gradually became extinct as English came to dominate the linguistic landscape of America. Seeking to revive a central part of Wampanoag cultural identity, Baird founded the Wôpanâak Language Reclamation Project, which aims to recover the grammar of the Wampanoag language using modern techniques from written historical records. Baird received a MacArthur Fellowship in 2010 to support this project, and at Commencement, she was presented with an honorary Doctor of Social Science degree by Yale University president Peter Salovey. 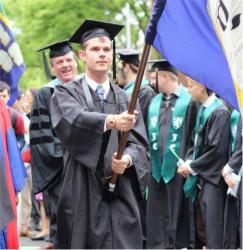 Tom McCoy, an undergraduate linguistics major at Yale, received the prestigious Henry Alpheus Snow Prize at the graduation ceremony for the Class of 2017. This prize is awarded to the graduating senior “who, through the combination of intellectual achievement, character, and personality, shall be adjudged by the faculty to have done the most for Yale by inspiring in his or her classmates an admiration and love for the best traditions of high scholarship.” In addition to his outstanding academic record with a 4.0 GPA, the award recognizes Tom’s efforts to introduce linguistics to middle school and high school students in New Haven as a local organizer of the North American Computational Linguistics Open competition. After graduation, Tom will continue his linguistics career by pursuing a PhD in cognitive science at Johns Hopkins University.

Both individuals have received praise from the Linguistic Society of America for their efforts to promote interest in linguistics and language-related issues. We congratulate these two outstanding linguists on their distinctions, and we wish them the best of luck!