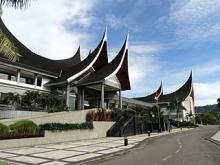 Ph.D. candidate Rikker Dockum presented research on the Tai Khamti language at the 2017 meeting of the Southeast Asian Linguistics Society (SEALS). Rikker’s talk, entitled “Class term doubling in Tai Khamti: reanalysis, reinforcement, and sesquisyllables,” focused on a family of morphemes in the Tai Khamti language known as class terms. These morphemes, found in languages throughout Thailand, indicate the semantic class of a compound noun. For example, in the compound maak6 mong2 ‘mango,’ the morpheme maak6 ‘fruit’ indicates that the compound noun refers to a fruit.

Rikker’s talk explored an ongoing diachronic change in the form of class terms in Tai Khamti. Because class terms occur in an unstressed position within a compound noun, the phonology of Tai Khamti may sometimes reduce the class term by centralizing the vowel and bleaching the tone—in other words, the vowel and tone of the class term are sometimes changed from their original forms to more “neutral” forms. For example, the compound maak6 mong2 ‘mango’ sometimes appears as ma-mong2: the vowel aa in the class term maak6 ‘fruit’ changes to a, and the tone 6 is lost. While these reduced forms, known as sesquisyllables, originated from forms with full class terms, many speakers reinterpret them as bare nouns that lack class terms. These speakers then add another class term to these nouns, resulting in forms like maak6 ma-mong2 ‘mango,’ in which the class term seems to appear twice, once as maak6 and once as ma-. This leads to the existence of three separate forms for compound nouns. Rikker’s talk investigated the distribution of these three different types of compound nouns, and made predictions for possible future changes to the forms of class terms based on similar trends observed in related languages.

The SEALS conference was held in Padang, Indonesia, from May 11 to May 13. The abstracts, including Rikker’s abstract, can be found on the conference website.