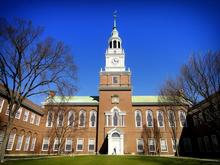 Ph.D. candidate Rikker Dockum delivered an invited talk at his undergraduate alma mater, Dartmouth College. His talk, titled “The Tonal Comparative Method: Leveraging Lexical Tone in Historical Linguistics”, deals with his work extending the traditional Comparative Method to deal with evidence from sound change in tone systems. The Comparative Method is a method in historical linguistics for classifying languages and reconstructing their common ancestor languages. To date the method has focused on segments–consonants and vowels. His talk also deals with the use of computational phylogenetic tools, to quantify the amount of “phylogenetic signal” found in tone changes. Phylogenetic signal is a statistical measure of dependences between traits due to their historical relatedness.

Here is the abstract of Rikker’s talk:

The Comparative Method (CM) is one of the primary tools of historical linguists for determining relationships between languages and reconstructing ancestor proto-languages. However, the CM has focused almost exclusively on reconstructing segments, with lexical tone sometimes used as an example of where the method is not applicable at all (Meillet 1948, Campbell 2003). Key to the scientific validity of the CM is having generally reproducible principles for distinguishing retentions and innovations from chance resemblance. Recent increases in the quantity of tone data available provide an opportunity to extend our reach by applying the logic of the CM to lexical tone, which I propose as the Tonal Comparative Method (TCM). The rich and relatively recent tonal history of the Tai languages makes them an ideal testing ground for the TCM. Combining the traditional method with insights from computational phylogenetics, this talk shows how tonal evidence illuminates the historical picture. By using all available evidence, tonal and segmental, we can make stronger recontructions and solve difficult subgrouping problems. The TCM also increases transparency and reproducibility in historical linguistics, and the Tai languages serves as a model for how we might extend it to sound change in lexical tone systems more generally. This represents a significant step in moving historical linguistics into its bright future in the Big Data era.