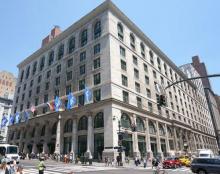 Professor Raffaella Zanuttini spoke at the Linguistics colloquium of the Graduate Center of the City University of New York (CUNY). Her talk featured joint work with Assistant Professor Jim Wood on presentatives. Presentatives are sentences that introduce something to the conversation and draw the listener’s attention to it. The talk gave the following sentences as examples of presentatives in several languages.

The talk took place on September 14. The abstract can be found on the CUNY website.