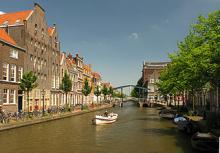 Postdoc Matt Barros and Lecturer Hadas Kotek presented at the poster session of the Generative Linguistics in the Old World (GLOW) conference. Their poster, entitled “Scope restrictions in multiple sluicing and ellipsis licensing,” discusses the contrast between the following sentences. While the first sentence is not a well-formed sentence of English, the remaining three are.

Traditionally, it has been believed that sluicing can only occur if the structure of embedded clause is congruent to the outer clause in a certain way. Matt and Hadas’s poster analyzes the structures of the four sentences above, and shows that theories of structural congruence would predict sluicing to be allowed in both the first and the third sentence. On the other hand, the poster argues that if we assume that a congruency between the meaning of the embedded clause and the outer clause can permit sluicing, then sluicing should be prohibited in the first sentence but allowed in the third sentence, as the data show.