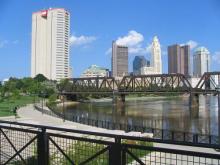 Associate Professor María Piñango and PhD candidates Martín Fuchs and Sara Sánchez-Alonso discussed various topics in Spanish linguistics at the Ohio State University Congress on Hispanic and Lusophone Linguistics (OSUCHiLL). The work that the Language & Brain Lab members presented was done in collaboration with Associate Professor Ashwini Deo of the Ohio State University, who was formerly a faculty member at Yale. Together, the four scholars presented two talks showcasing the Language & Brain Lab’s interest in how psychological and neurological factors may cause languages to exhibit variation across communities or change over time. As an international language spoken in multiple continents with a rich history of written literature, Spanish presents an excellent opportunity to observe variation and change in action through its diverse population of speakers in different countries and time periods.

Martín’s research, for example, sees in modern Spanish a story that has unfolded many times before in other languages. Working with María and Ashwini, Martín is investigating two Spanish verb tenses: the present progressive and the simple present.

Sara’s work, collaborating with María and Ashwini, explores a similar process of change in Spanish. Whereas Martín studies verb tenses, Sara studies two versions of the verb to be: ser and estar. Those who have studied Spanish before probably know that ser typically states the identity of a person or object, while estar usually describes a person’s location or emotional state.

When estar entered the Spanish language from Latin in the 12th century, it only described the locative meaning: Juan is here. However, like the present progressive, estar came to take on more and more meanings over time as speakers began to use it in more and more diverse ways. Today, in addition to describing emotional state, estar​ may also be used to express that a statement is unusual or surprising. For example, among the sentences below, a speaker may choose to use estar instead of ser if the house is not only big, but bigger than average. On the other hand, the speaker may use ser if the house is big, but not much bigger than other houses.

While location, emotional state, and surprise seem unrelated to one another, they have one characteristic in common: in all three contexts, the speaker is stating that a person or object has a property that is temporary. For example, while Juan’s status as a linguist is more or less permanent, his location and emotions are likely to change rather soon. And an observer who sees a large house may re-evaluate her opinions if she were to see even bigger houses later on. If we understand estar to describe properties that are temporary, we may expect estar to take on more meanings in the future that refer to other kinds of temporary properties.

OSUCHiLL was held in Columbus, Ohio, from March 30 to 31. The program is available on the conference website.