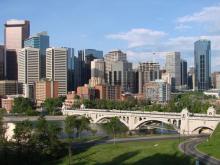 Assistant Professor Jim Wood spoke at the University of Calgary last Friday, as part of the Speaker Series of the School of Languages, Linguistics, Literatures & Cultures. Jim’s talk introduced the audience to the research on morphosyntactic microvariation conducted by the Yale Grammatical Diversity Project (YGDP). Jim’s talk at the University of Calgary is the latest in a series of presentations that Jim and Professor Raffaella Zanuttini have been giving across North America promoting the YGDP’s work.

Most people are familiar with the idea that different language communities speak with different accents. An accent might be known for using words only found in a certain region, or for pronouncing speech sounds in a distinctive way. However, these are not the only ways in which dialects of a language might vary from one another. The YGDP’s work focuses on variation in morphosyntax—the structure of words, phrases, and sentences. It turns out that English dialects spoken in North America exhibit an extraordinarily diverse array of word and phrase structures, many of which are unique to certain regions of the United States or Canada. These constructions are described in detail on the YGDP website.

For this talk, Jim focused on extended benefactives, a special type of sentence structure found in Southern American English. Benefactives are sentences that describe an action and specify the intended beneficiary of the action. For example, the sentence below says that a cake was baked, and indicates that the cake was baked specifically for the benefit of the listener (you).

In General American English, benefactives can be constructed by including the beneficiary of the action as the indirect object of the verb. This is the construction shown above. In Southern American English, however, beneficiaries appear in positions within a sentence where indirect objects are not typically found. Such sentences are called extended benefactives. For example, in the sentence below, a beneficiary appears with the object of a prepositional phrase. This sentence says that the speaker (I) is bringing some tea, which will be given to the listener (you).

According to surveys conducted by the YGDP, extended benefactives are common in the Southern United States, but not accepted elsewhere. What is the difference between the grammars of Southern American English and General American English, such that extended benefactives are possible in the former dialect but not the latter? To answer this question, Jim draws upon past research that has attempted to analyze the structure of verb phrases. Many linguists believe that there is a special phrase that includes the indirect object and the direct object of a verb. Jim calls this the applicative phrase (ApplP); in They baked you a nice cake, for example, you a nice cake is an applicative phrase. Jim’s talk argues that the difference between the two dialects is that Southern American English often allows applicative phrases to be treated like normal noun phrases. Therefore, beneficiaries can appear in places where noun phrases are found, even if they do not seem to have anything to do with indirect objects. On the other hand, applicative phrases are more tightly integrated into the structure of verb phrases in General American English, so beneficiaries are usually associated with verbs in some way.

Jim’s talk took place on October 13 in Calgary, Canada. The abstract is available on the University of Calgary website.