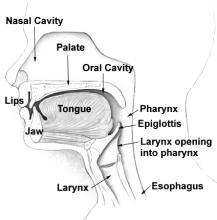 Assistant Professor Jason Shaw’s work was recently highlighted by the Association for Laboratory Phonology, which has featured an article by Jason in its journal and a talk by Jason at its annual meeting.

There are many different ways of speaking English around the world, and the pronunciation of English words exhibits a phenomenal level of variation across geographic regions, ethnic communities, age groups, socio-economic classes, and other divisions of human societies. Nonetheless, most English speakers are able to communicate with one another, even with those who speak dramatically different dialects. Jason’s journal article, entitled Resilience of English vowel perception across regional accent variation, investigates the ability of individuals to identify vowels spoken in different accents. Jason and his collaborators conducted two experiments in which participants listened to a short story along with a series of articifical words. Each of the artificial words contains a vowel, which the participants were asked to identify. All the participants were from Australia, but the artificial words were recorded by speakers from England and New Zealand. The participants were able to identify most of the vowels correctly, though some of the vowels posed a challenge. The results were unaffected by whether the short story was read in Australian English or in the accent of the artificial words, suggesting that a small amount of exposure to an accent does not significantly help individuals adapt to processing speech in that accent.

The conference presentation dealt with the relationship between space and time in articulation. During the process of speech, various parts of our mouths move in intricate, carefully coordinated patterns. Phoneticians typically describe speech sounds in terms of the position of the tongue and other parts of the mouth when producing those sounds, as well as the relative timing of the various gestures that comprise those sounds. Jason and his collaborator, research scientist Wei-Rong Chen of Haskins Laboratories, wanted to know whether or not the position of the parts of the mouth have an effect of the timing of the gestures. Jason and Wei-Rong used a technique called electromagnetic articulography to record speakers of Mandarin Chinese as they produced various syllables. Each syllable begins with a consonant, which is described by a particular position of the lips and tongue, and ends with a vowel, which is described by a different position of the lips and tongue. During the course of the syllable, the mouth begins in the consonant position, and moves in various ways, reaching the vowel position at the end of the syllable. Jason and Wei-Rong found that in general, gestures began later if the tongue and lips are close to their destinations, and earlier if they are far away from their destinations.