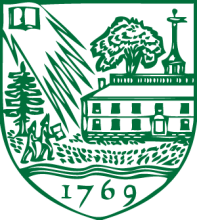 Postdoc Hannah Haynie has been invited to deliver a special lecture for the occasion of homecoming at Dartmouth College on Thursday, October 16th. The title of Hannah’s lecture is “Sound Symbolism in Australian Languages: Phonetic Iconicity Re-examined,” based on her joint work with Associate Professor Claire Bowern and alumna Hannah LaPalombara (BA ‘13). Their work was also published in PLOS ONE earlier in the year. The abstract of the talk is as follows:

A central principle of linguistics is the arbitrary association of sounds with meanings (Saussure 1916), yet research has identified several semantic areas in which sounds instead bear an iconic relationship with the meanings they represent (Sapir 1929, Ultan 1978, Ohala 1997, Hinton et al. 2006). For example, high or front vowels are commonly associated with concepts that involve ‘smallness’ or ‘nearness’ (e.g. Jespersen 1933, Ultan 1978, Traunmuller 1996). However, little work has been done to systematically test the extent to which these common patterns occur within languages or across language areas. Such systematic study is crucial to resolving debate regarding the universality of sound iconicity.
This study focuses on patterns of sound symbolism associated with magnitude-related meanings in languages of Australia. To evaluate evidence for sound iconicity within and across languages, we compare the occurrence of purportedly symbolic sounds in a sample of magnitude-related words to the overall frequency of those sounds in the same languages. Phonemically transcribed data from 120 Pama-Nyungan and non-Pama-Nyungan languages provide a robust sample for testing the proposed associations between sounds and meanings.
Our findings indicate that magnitude-related sound symbolism is indeed found in Australian languages. Specifically, we find associations of meanings denoting ‘smallness’ or ‘nearness’ with front vowels or palatal consonants, and meanings of ‘largeness’ or ‘distance’ with back vowels or velar consonants. However, the patterns we find in this region are more complicated than predicted. Despite providing general support for the universal nature of certain sound symbolic associations, our findings suggest that a simple mapping between gradients of magnitude and vowel F2 is not sufficient for explaining this type of sound iconicity and that the realization of magnitude symbolism varies across languages.