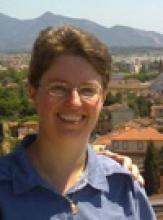 As of today, Professor Claire Bowern will assume the role of full professor in the Department of Linguistics. Claire’s research focuses on the Pama-Nyungan languages, a family of languages spoken by aboriginal peoples in Australia, covering diverse topics including language contact, historical linguistics, language documentation, and fieldwork. In addition, Claire has produced numerous resources for linguists, including CHIRILA, an extensive database containing lexical information from languages throughout Australia, and Linguistic Fieldwork: A Practical Guide, a book introducing various techniques for conducting fieldwork.

Claire has received numerous accolades for her work. In 2014, Claire received the Kenneth L. Hale Award from the Linguistic Society of America for her contribution to the documentation of the Bardi language. In 2015, Claire was elected vice-president of the Endangered Language Fund. Earlier this year, Claire’s work on Bardi was featured along with Assistant Professor Ryan Bennett’s documentation of Kaqchikel in a presentation by Yale University president Peter Salovey at the World Economic Forum in Davos, and a feature article appeared in Science introducing Claire’s application of Bayesian techniques from computational phylogenetics to the construction of a phylogeny for the Pama-Nyungan languages.

As an assistant professor, Claire has taught a wide range of courses at the undergraduate and graduate levels, including Historical Linguistics, Linguistic Change, and Field Methods. She continues to serve as Director of Graduate Studies, as well as director of the Pama-Nyungan Lab.